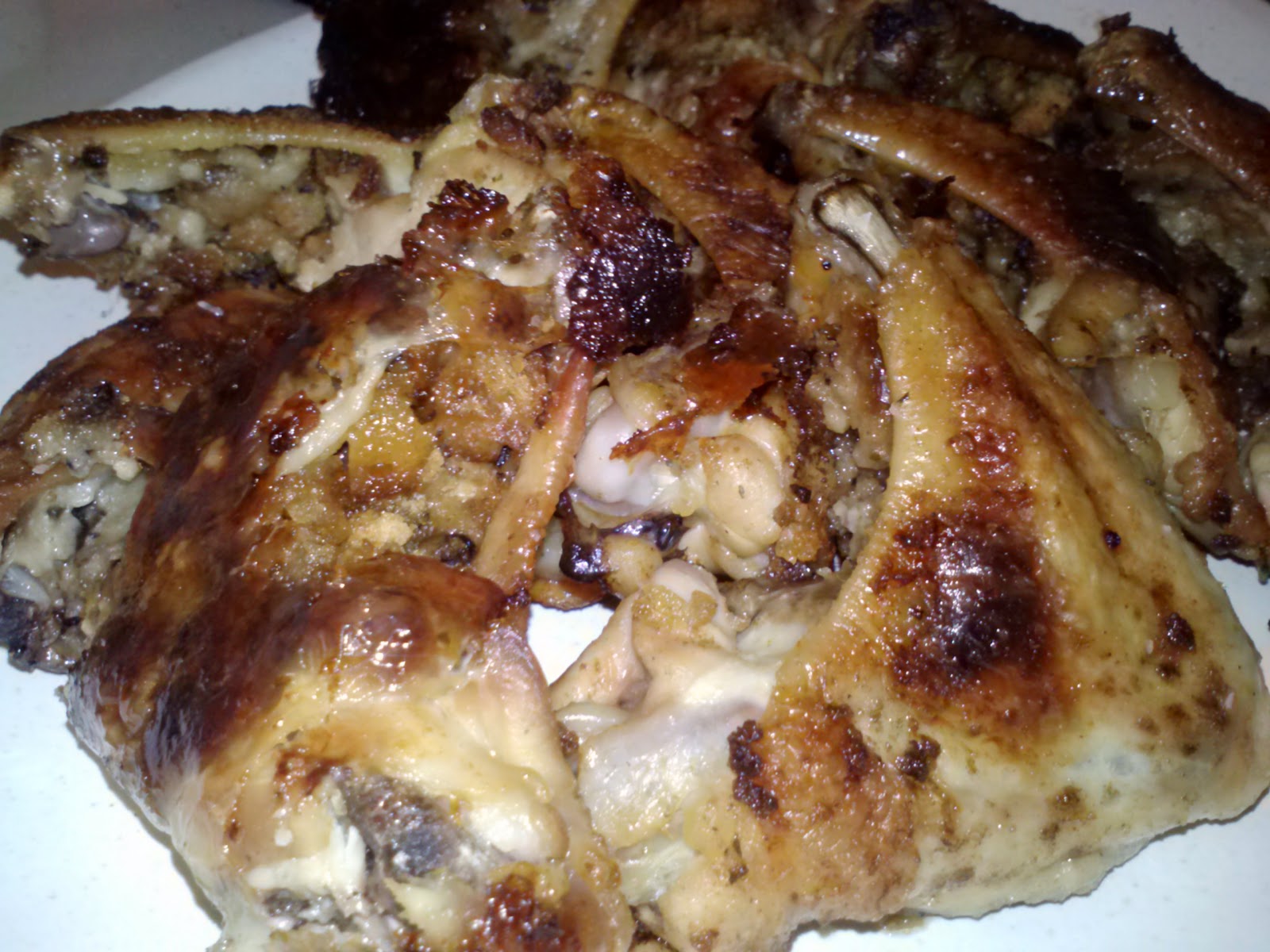 Chicken wings are one of my favorite guilty pleasures, especially fried with tons of Sriracha and Chunky Bleu Cheese!  The prices for these puppies seem to be battling those of gold bouillon in some stores, so I wanted to make the best of the purchase, sans frying, and take the chicken wings to new and exciting heights, no pun intended lol.
With a simple packaged Chicken stuffing and some fresh diced mushrooms, I stuffed,  then baked the wings until cooked through and golden.   Serve these wings with savory sides like garlic mashed potatoes,  glazed carrots and/or wilted spinach.   My mom really liked the recipe and I beamed with pride because she is my most discerning critic!
This recipe is a bit demanding, but not difficult if you have basic knife skills and a sharp one at that, preferably a filet knife.  It is however, fun to see the reactions of the family when they realize that you've
managed to stuff a chicken wing!
Recipe:
10-12 chicken wings
1 5 oz. box chicken stuffing
1/2 c. fresh, small diced mushrooms
2 tsp. chicken broth or water
Paprika
olive oil for drizzling
SPST
Preheat oven to 375*F.
Combine stuffing , mushrooms and stock .
Remove tips from chicken wings, set aside for stock or other use.
Make an incision about 1 inch long on the inside of the wing, where the fan-like skin is and carefully separate skin from meat as much as possible.
With the knife separate the meat between the two flat wing bones for slightly more space.
Stuff each wing with about 2 tbsp. stuffing mix and place stuffed side down in a lightly greased baking pan or dish.  It is okay to fit the wings snugly end to front to help keep uniform as it cooks.
After all wings have been stuffed, lightly brush with olive oil.
Sprinkle with Paprika and SPST.
Bake for 10-15 minutes uncovered, until start to turn golden, reduce heat to 350*, then bake about 20-25 minutes loosely fitted with foil.
Transfer to paper towels for several minutes before plating.
Serves 5-6.

Posted by Denese Smith at 11:50 AM No comments: 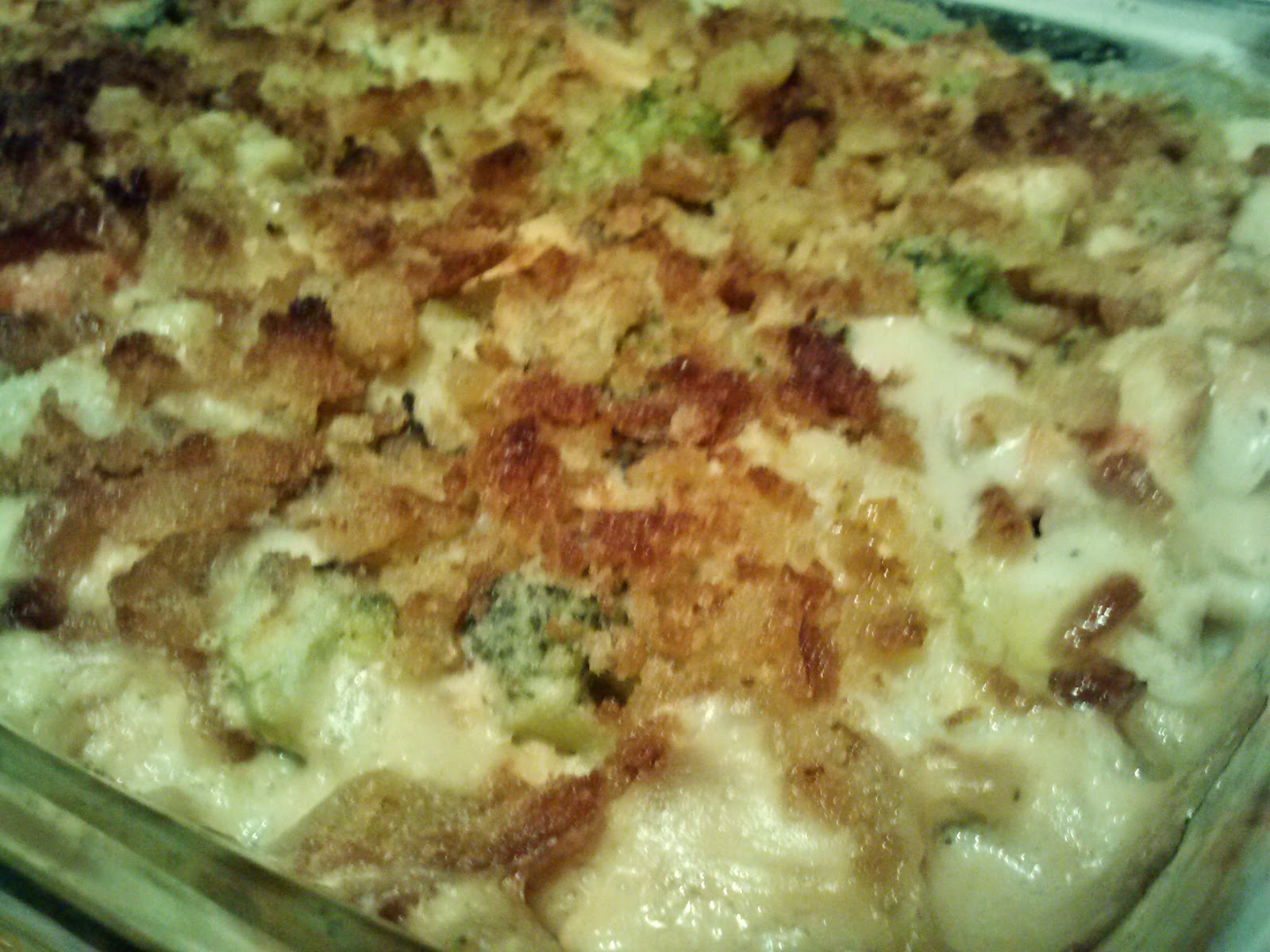 This recipe is a comforting and vegetable packed one-dish meal, and has an outstanding flavor profile.  It's filled with 2 1/2 lbs. of wonderful goodies like broccoli, cauliflower, carrots and  mushrooms and white meat chicken,  in a creamy and delicious homemade cream sauce reinforced with a little bought Parmesan Garlic Alfredo sauce and topped with  fresh toasted and buttery bread crumbs.  It is simplistic and satisfying and can be prepped ahead of time to be baked later.  Variations within the recipe can accommodate a version with less fat and fewer calories.  The family of tasters received the dish very well and I am looking forward to another overcast or rainy day with a chill, to use this dish as a soothing pick me up:)
Recipe:
1 1/2 lb. boneless skinless chicken breast, cut into bite sized pieces
1/2 c. sliced fresh mushrooms
1 1/2 lb. fresh or frozen broccoli, chopped
1 lb. fresh or frozen California Blend (broccoli, cauliflower and carrot)
2 tbsp. butter, plus 2 tsp. olive oil
3 tbsp. AP flour
1 c. evaporated milk, regular or fat free
2 c. low sodium chicken stock
1/4 c. grated Parmesan cheese
1 c. Garlic Parmesan Alfredo sauce
olive oil for drizzling
SPST
For Topping:
2 c. fresh bread crumbs
2 tbsp. butter
Preheat oven to 350*F.
Steam veggies according to package directions until tender crisp, drain well.
Season chicken pieces.
In a large saute pan drizzled with olive oil over medium high heat , sear chicken pieces until slightly golden, about 5 minutes.
Add mushrooms and cook an additional 3 minutes.
Add butter and sprinkle in flour.
Cook together until chicken is coated with flour paste, about 2 minutes.
Remove from heat and whisk in milk and stock.
Reduce heat to medium and cook until thickened.
Add Parmesan cheese and Alfredo sauce.
Fold in veggies.
Transfer to greased baking vessel, about 11x2, and spread evenly.
In another pan, melt butter over medium high heat and drizzle in a little olive oil.
Fry bread crumbs in pan until fragrant, about 2 minutes.
Spread atop casserole and cover tightly with foil.
Bake for about 20 minutes or until casserole is bubbly and golden around edges.
Remove foil and bake an additional 10 minutes.
Let stand for several minutes before serving.
Serves 6 to 8.

Posted by Denese Smith at 11:06 PM No comments: 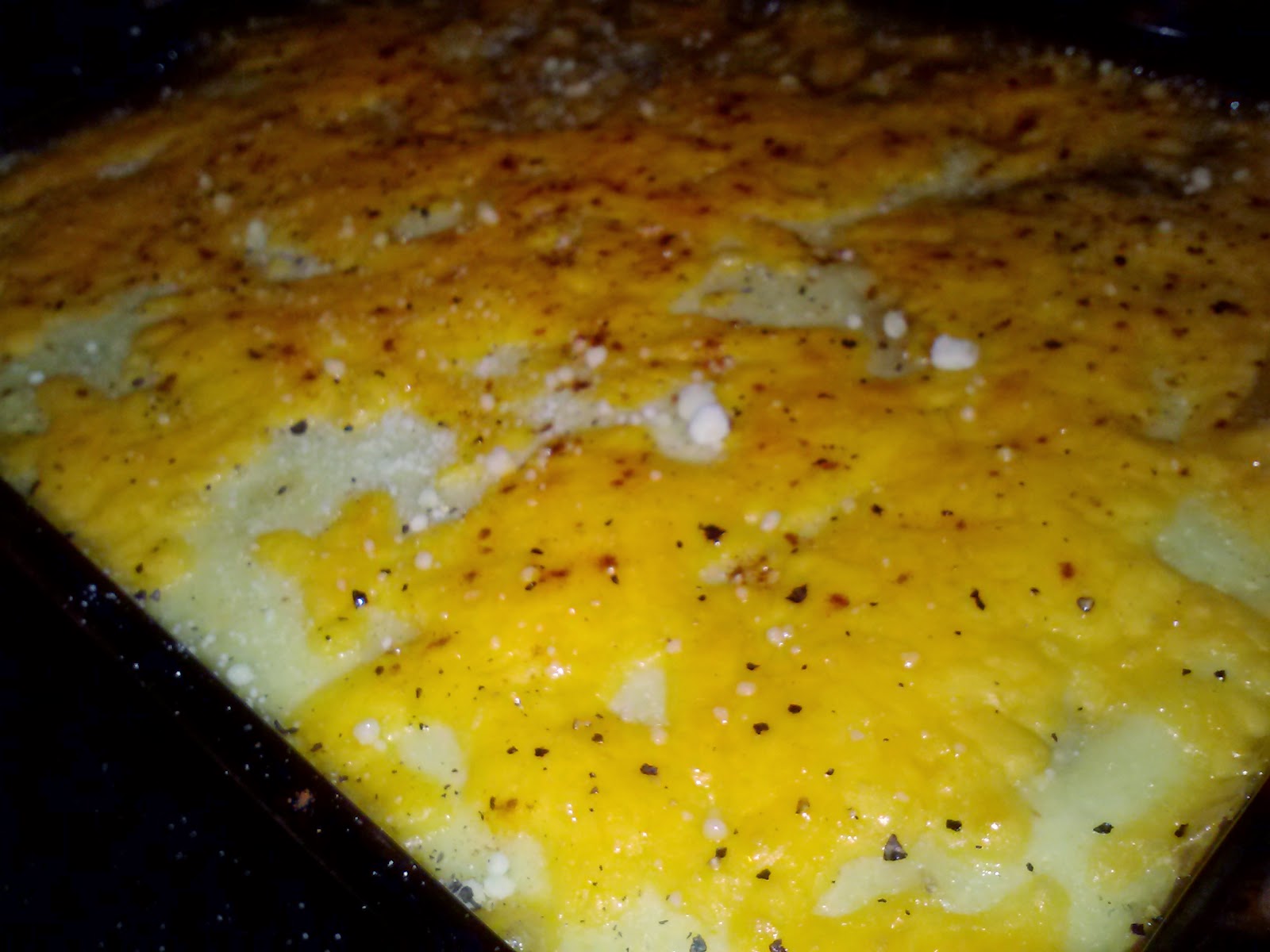 Shepard's Pie, traditionally minced beef with veggies ,baked with a mashed potato topping, is a popular dish hailing from Great Britain and likewise, here in America.  I first tried this on a trip to England with my  advanced and high school Science teacher , Shirley Cothran.  We spent 2 weeks traveling and touring the country and it's adorable  little towns, Westminster Abbey, Shakespeare and Anne Hathaway''s home, where we sat and swung in a cozy wooden swing,  in it's beautiful garden, Windsor Castle, the Tower of London, where we experienced some of the Medieval torture devices, Jack the Ripper's Ghost Walk, tracing the steps of the infamous forerunner for serial killers, to the unforgettable Madame Tussauds Wax Museum in London,  which was absolutely amazing.
These memoirs are just a few of the many fantastical memories made when I was 15 years old.  The excursion was a most exciting and memorable one.  The rain was hit and miss and we were lucky that it was the driest period England had experienced in ten years! Whoohoo!  Ironically, a wedding party trashed one of the hotels in which we were scheduled to stay , bumping us up to a 5 star hotel at the last minute for 2 days!  Thanks Wedding Wrecking Crew!:)
The idea for this version of Shepard's Pie came about by happenstance.  I had prepared a birthday dinner the night prior for my nephew Justin, featuring  two of his favorite foods,  ribs and homemade mashed potatoes.There were some potatoes leftover, though not enough for reasonable side portions, and the wheels began to turn. I had approximately one pound of ground beef on hand as well as this huge boneless skinless chicken breast weighing about 3/4 lb., which I cut into bite sized pieces. I knew that singularly, one of the proteins would not accommodate dinner, but together, they could provide for a substantial and filling dish.  The recipe was a big hit and the name is derived from the marrying of the chicken to the beef in taste-bud matrimony, in a romantic one dish meal.
Recipe:
1 lb. ground beef
3/4 lb. boneless, skinless chicken breast, cut into bite sized pieces
2 cloves garlic, pressed or finely minced
1 pkg. onion soup mix
2 c. water or beef stock
1 tbsp. corn starch
2 small carrots, sliced, about 1/2 c.
1/2 c. sweet corn kernels
1/2 c. frozen peas
2 c. prepared mashed potatoes
1/4 c. evaporated milk
1/4 c. grated Parmesan cheese, plus more for garnish
2 eggs, slightly beaten
1/2 c. shredded sharp Cheddar cheese
Olive oil for drizzling
SPST
Preheat oven to 375*F.
In a large saute pan over medium high heat, brown ground beef and remove with a slotted spoon.
Set Aside.
In the same rendered fat, brown the chicken pieces in batches, adding it to the vessel with the beef .
After all the chicken has been browned, pour excess fat from pan and re-add meats.
Add garlic, onion soup mix , stock and corn starch and bring up to a boil.
Remove from heat and stir in all vegetables, except mashed potatoes.
Pour into an oven safe vessel at least 2 inches deep.
In a separate bowl, combine potatoes, evaporated milk, Parmesan and eggs.  Blend well.
Pour and spread potato mixture over meat filling and cover tightly with foil.
Bake until potatoes have set, about 30 minutes, and toothpick inserted comes out clean of potato topping.
Remove foil and sprinkle with Cheddar and turn oven to  broil.
Broil until cheese melts and top browns slightly.
Garnish with Fresh cracked pepper, Parmesan, olive oil and fresh chopped parsley if desired.
Let stand for about 10 minutes before serving. Serves 8-10.


Posted by Denese Smith at 2:24 PM No comments: 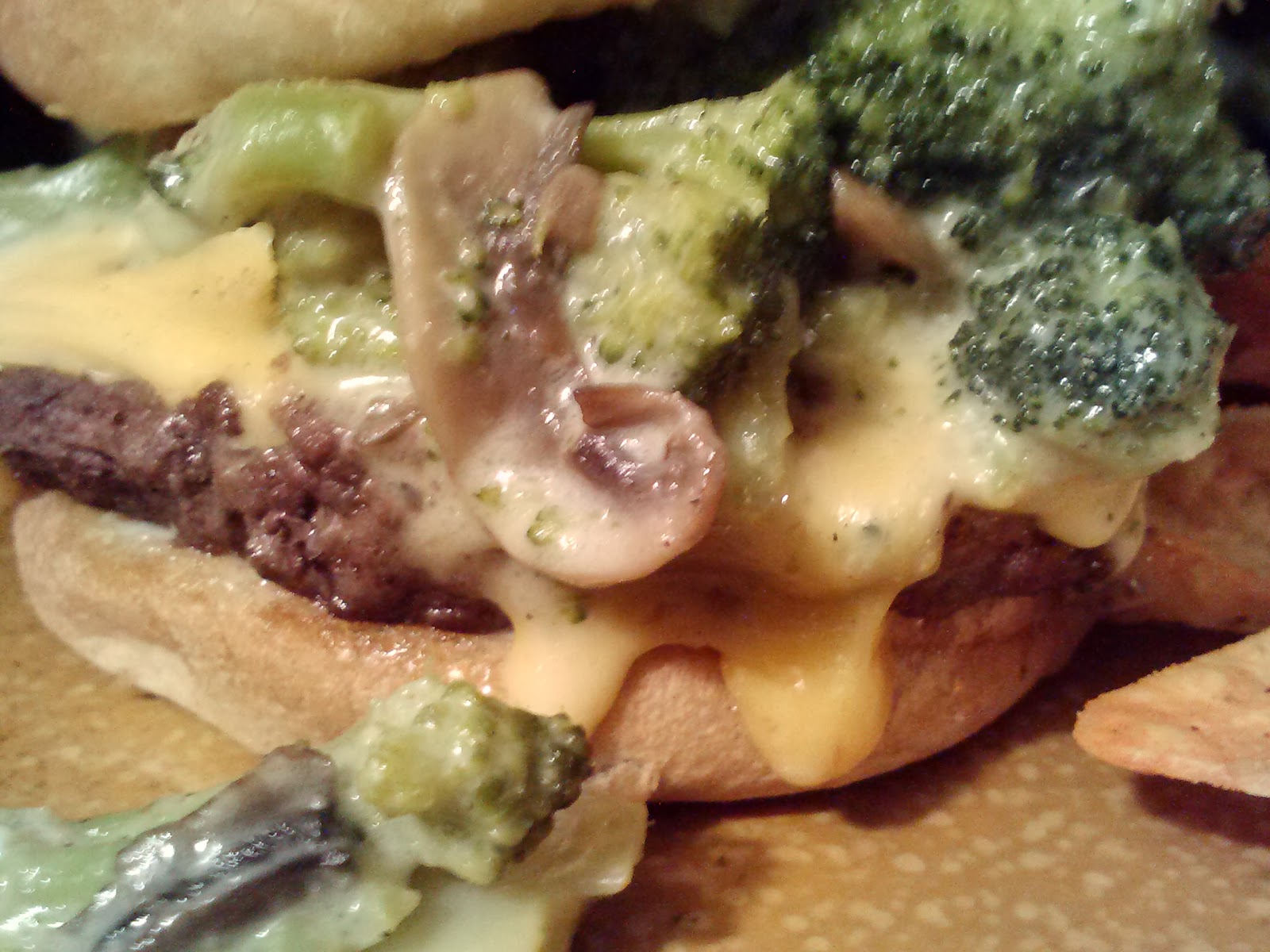 What better way to throw some veggies into your family's diet, than pairing it with a 1/3 pound Angus beef patty and smothering them with broccoli and sauteed mushrooms, swimming in cheese sauce?  Of course this burger isn't your everyday fare, but the menu and meal that day will be unforgettable and can reasonably fit into just about any  hectic schedule. The mushrooms are fresh and the cheese sauce is homemade, so you can definitely feel better about it and is may be prepared with 2 % milk, plus reduced fat Cheddar cheese!   Serve as is for a meal or with Doritos, fruit or salad for a hearty and fantastic burger without sacrificing too many calories or your integrity.  Additionally, you can substitute the beef for an extra lean beef, lean chicken or turkey burger to further shave down on fat and calories.  Whole grain buns will work well too and add a jolt of fiber and other essential vitamins and minerals like potassium, thiamin and phosphorus.  Just remember to add a little olive oil to the leaner ground to help retain moisture and  maximum flavor!  What the heck, try them all especially for your next cookout and WOW your crew with these wonderful flavor profiles! Enjoy.
Recipe:
1 lb. fresh or fresh frozen broccoli florets, steamed until tender crisp
2 tbsp. butter, plus 1 tbsp. olive oil
1 tbsp. AP flour
4 oz. fresh mushrooms, cleaned and sliced
2 c. milk
1 1/2 c. sharp cheddar cheese
6 1/3 lb. Angus beef patties
6 slices American cheese
mayonnaise, optional
6 hamburger buns, toasted if desired
SPST
In a large saucepan, melt butter and add olive oil over medium high heat.
Add mushrooms and cook for several minutes until they show signs of browning.
Sprinkle in flour and cook for an additional minute.
Remove from heat and whisk in milk.
Reduce heat to medium and place pan back over heat.  Cook until milk starts to thicken and stir in cheese.
Continue to cook until cheese is melted and smooth. Fold in broccoli that has been drained thoroughly.  SPST.
Assemble cooked patties on bun slathered with mayo if desired and add cheese.  Smother with about 1/4 c. broccoli and cheese sauce and serve with desired side or sides.

Posted by Denese Smith at 11:01 PM No comments: