This recipe is a quick and hassle free version of a tasty meatloaf that's SUPER, especially if you have never made one or for guys and gals who like meatloaf, but don't necessarily like to cook. The finished product is moist and flavorful, plus makes for super comfort food sandwiches later.
This recipe is initially designed for a larger family like mine, but I have offered a scaled down version for smaller families as well. The first recipe is also fantastic for make ahead meals.
If you want to save on cooking for dinner time in the future, simply prepare the original recipe and divide the meatloaf blend into 2 or 3 disposable loaf pans, baking and freezing the others, cooled wrapped tightly in plastic wrap and placed in a zip type freezer bag! The loaves will keep for at least 3 months, not that you will want to wait that long!
No worries about onion or garlicky hands, because all the ingredients are prepared mix-ins. Some cooks argue that meatloaves and ground meats are best when manipulated with your hands. I beg to differ and would rather opt for a long tined fork stirring and a sturdy rubber spatula, using a folding fashion for the bulk of the work and saving my hands for shaping at the end.
Make Ahead/Multiple Meal Recipe:
3 lbs. meatloaf blend, beef, veal and pork
5 oz. bag cheese and garlic croutons, crushed, about 1 1/2 c.
1/2 c. good quality medium salsa
1/3 c. ketchup
1 tbsp. fish sauce
1 tbsp. onion powder
6 slices good quality bacon, halved
SPST
Preheat oven to 375*F. Combine all ingredients w/ fork and rubber spatula until well blended.*
SPST.
Shape into oblong loaf and arrange the pieces  of bacon along the length of the loaf.
Bake until internal temperature reaches 165*F, about 35-40 minutes.
Let rest for 10 minutes or more before serving.
*I like to check my seasonings by frying a thin, tiny disc of the meat mixture before committing it to the shape or the oven, it's the best way to check.  I learned this tip from Emeril Lagasse about 2 decades ago, BAM!
Small Family/ Single Meal Version:
1 lb. Meatloaf blend
1/2 c. Garlic and cheese croutons, crushed
1/3 c. Good quality medium salsa
2 tbsp. Ketchup
1 tsp. Onion powder
1 tsp. Fish sauce
SPST.
2-3 slices Bacon, halved.
See above instructions.
Posted by Denese Smith at 12:39 PM No comments: 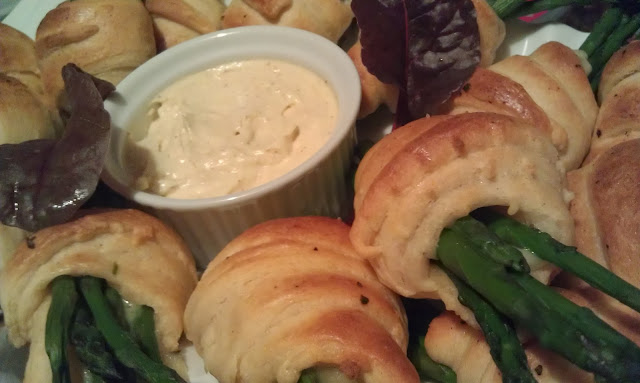 This recipe is fun and great for entertaining or for introducing new and ornate veggies to your family and friends. The ingredients are simple and the results are fantastic. You can use this as a Great side dish to a wonderful roast or chicken. The name arose withe the clever help of my cousin Aaron, a tried and tested taster for 99% of my work and gets the perks of new and different menus for display where he works!  Recipe:
1 lb. Baby asparagus, blanched 1 minute and shocked,
1 8 oz. Roll buttery crescent rolls,
1 oz. Gruyere, sliced into 16 1/4 inch strips about 1 inch long,
2 heaping tbsp. Whipped cream cheese,
1 1/2 tsp. Mayonnaise,
1 tsp. Horseradish mustard,
1 drop Sriracha

Preheat oven to 375*F. Blanche asparagus in salted water for 1 minute and remove and shock in ice bath, drain on paper towels. Remove woody and fibrous part of stems, leaving approximately half of the asparagus. Put in bundles of 4 to 5 asparagus spears forming 16 groupings. Carefully unroll crescent rolls and One By One, divide each in half and center a portion of cheese at the largest end as well as a bundle of spears and roll according to the directions. Place on baking sheet evenly spaced and brush with a little milk. Bake until golden and cheese is melty, about 6 minutes. Meanwhile combine the cream cheese, mayo, mustard and Sriracha until smooth and creamy, place in small serving vessel and arrange bundles as desired.

Posted by Denese Smith at 6:18 AM No comments: 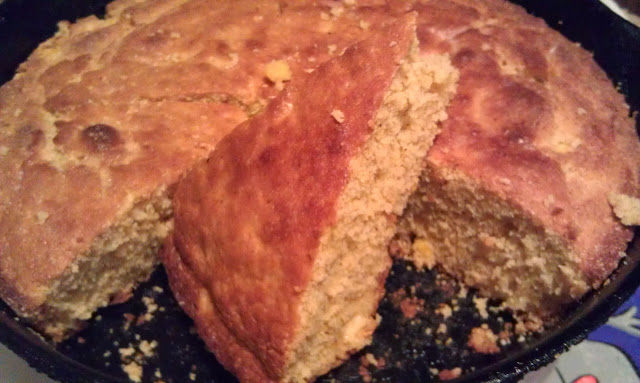 Corn meal and Maize is the source of much sustenance for Americans and other countries, and more so in the Southern lying states in America and New England.  Since the American Indians' introduction of a process called Nixtamalization, which is corn ground into a meal or soaked in a lime or alkaline salt to make hominy, the possibilities for providing with a plethora sustainable menu ideas is virtually endless.  Referred to as "Johnnycakes", journey cakes, shawnee cakes, to name a few, consisting of ground corn or corn meal, moistened with milk that has been scalded or water and salt, these cake variations were commonly fried in some sort of animal fat on a griddle type device or depending on the area, baked in the oven or fires and served savory or with sweeteners such as maple syrup or honey.  References to the johnny cake span from 1739 in New England.
The history of the journey cake is similar to that of the "Hoecake", by way of ingredients, but dissimilar in regard to preparation.  Hoecakes and the name therein has roots dating back to the negro  field hands, who without the means to afford certain cooking vessels, would use their ingenuity and used their hoes used in the cotton fields, as a griddle or baking sheet of sorts, to cook their cornmeal cakes over an open fire.  Hoes used for cotton farming were large and flat with a long, detachable handle, made for a suitable cooking device once greased with animal fat. Some of  the first noted references to hoecakes date back to 1745 by writers like Barlow and Washington Irving.
Ironically enough, here in our "middle-east" South, which I use to refer to here in Southwestern  Virginia, Hoecakes are considered as simply home-made, hand-shaped bread biscuits made from flour.  In lieu of cornbread, we seldom serve it without adding a measure of sugar for sweetness, which for us is the optimal way to serve the sumptuous, buttered corn cake.   At any rate, today's recipe features corn meal, embellished with wonderful Tex-Mex ingredients and baked in an old fashioned, seasoned cast iron skillet, which remains one of the staples in my kitchen.  Preparation is simple and time conscious, using  a packaged corn muffin mix to bring these fabulous items together.  This recipe pairs well with any meal, especially chili beans, pinto beans, or long simmered legumes of your choice or as the starch to serve alongside a fragrant, roasted chicken as I served this recipe to my family.
Recipe:
2 pkgs. corn muffin mix, such as Jiffy
1 tsp. onion powder
1/2 tsp. chili powder
1/2 tsp. cumin
2/3 c. milk
2 eggs, slightly beaten
2 tsp. Agave nectar

Posted by Denese Smith at 2:16 PM No comments: 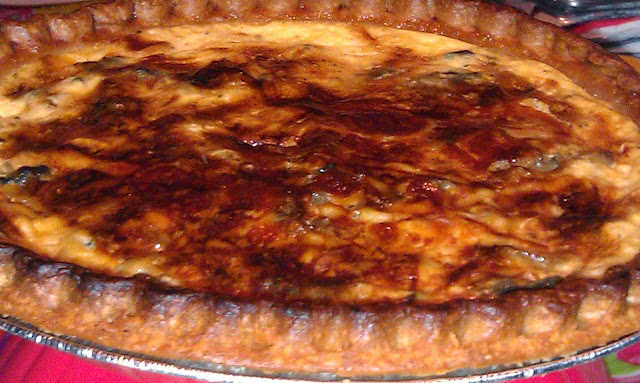 This quiche recipe is an extension of an entry past featuring a delightful quiche with sausage.  Normally, when  I venture into a specific dish, I make variations and try several types offering vegetarian or meat free options alongside the versions containing animal proteins.  While on my quiche 'kick', I came up with this recipe that is as equally enjoyable as the next and full of wonderful earthy mushrooms and spectacular Gruyere.
Recipe:
16 oz. button mushrooms, cleaned and sliced
1 small onion, chopped, about 1/3 c.
4 tbsp. salted butter
1 1/2 c. Gruyere, shredded
1/2 c. provolone, diced or shredded
4 large eggs
2 c. 1 1/2% milk
2 9 inch deep dish pie crusts
1/4 tsp. Sriracha
olive oil for drizzling
SPST
Preheat oven to 425*F.
In a skillet over medium high heat, melt butter and a drizzle of olive oil. When small bubbles form, add mushrooms. Cook for about 4 minutes, stirring frequently, until signs of browning starts to occur and add onion, cooking for another 2 minutes.  SPST.  Turn off heat.
Beat eggs, milk and sriracha together.  SPST
Divide mushroom mixture and cheese among the two pie crusts. Divide egg mixture among the two.
Bake for 15 minutes, then reduce heat to 300*F, covering loosely with foil if needed to keep from over browning and bake until knife  inserted comes out clean, about 30 minutes.  Serves 6
Posted by Denese Smith at 9:25 AM No comments: 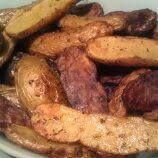 Just a quick recipe I  whipped up a few months ago that compliments the meatloaf and green bean recipes in my past two entries, for a great meal any day of the week.  When serving potatoes, one generally can't go wrong with the crowd, and when serving fingerling potatoes of various colors, special can be thrown into the mix of words describing the affair.  These puppies can get rather expensive, depending on the vendor, so by all means feel free to substitute with red, white or even russet.  The ingredients are minimal and you only have to invest about 30 minutes of  loosely supervised time and depending on what the main course is and the cooking method, this side dish can be prepared during the last stretch of cooking.
2 lb. fingerling potatoes, split lengthwise
1 tbsp. Jerk Seasoning
olive oil for drizzling
SPST
Place potatoes in large bowl and toss with seasoning and drizzled olive oil.  Let stand for about 30 minutes for flavors to permeate the potatoes.
Preheat oven to 400*F.  Spread potatoes in one layer on baking sheet,  SPST, and roast until golden, turning once if necessary, about 20 minutes.
Posted by Denese Smith at 1:02 PM No comments: