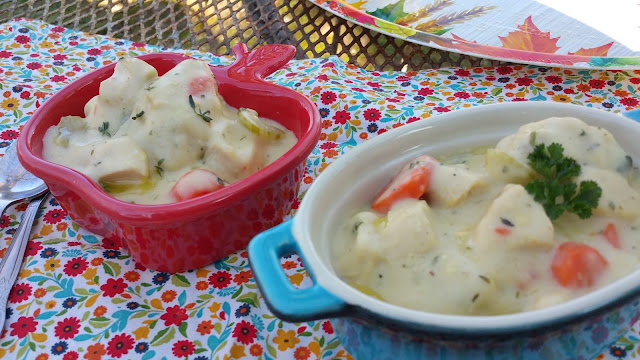 Instructions:
Place the washed chicken in a large heavy bottomed pot  and fill with stock just to cover.
Add whole celery, halved carrots, onion, and garlic and bay leaf.
SPST.
Bring up to a boil and skim the top of the stock, repeat as necessary.
Reduce heat to medium and cook chicken until cooked through, about 35 minutes, give or take.
While chicken cooks, prepare the dumpling mixture. Time it to be near the end of the cooking process.
Once chicken is cooked through, carefully lift from liquid and set aside on a plate or platter.  Make sure you have enough space to debone.  When cool enough to handle, remove skin, gristly parts and meat from bones in good sized pieces.
Remove stock and strain off, leaving only the flavorful stock to add back to cooking vessel.
Skim off excess fat.*
In the original cooking vessel, heated to medium, add the butter and two turns of the pan of olive oil.
Add chopped carrots and celery.
Add thyme sprigs.
Cook for several minutes until fragrant.
Sprinkle in flour and whisk or stir vigorously with fork or wooden spoon.
After about 2 minutes, gradually add stock back to the pot, whisking or stirring to incorporate.
Bring up to a boil, then reduce to a rolling simmer.
Add milk and stir well.
Check seasonings and SPST as needed.
Here is where you add your dumplings. Dumplings recipe below.
Allow to simmer until cooked through, about 12 minutes or more.
Re-add chicken by sliding back into pot on one side, then stir to distribute.
Simmer all items together for several more minutes to marry the dish.
Garnish with fresh parsley and thyme.
Makes about 10 servings.


*This portion will benefit from refrigeration for a period of about 20 minutes to help the excess fat solidify and can be easily removed. This is not required but optimal, if you have the time.

Combine flour, baking powder and salt until well blended.
Cut in butter and olive oil, until it takes on a crumb-like texture.
Add remaining ingredients and stir until just blended and completely moistened, careful not to over mix, unless you like a tougher dumpling.
The dough will be a little sticky and that's okay.
Using one side of a tablespoon, make quenelle shaped dumplings and add to simmering stock one by one.
Dipping the spoon  in hot water before each dumpling will help with sticking. 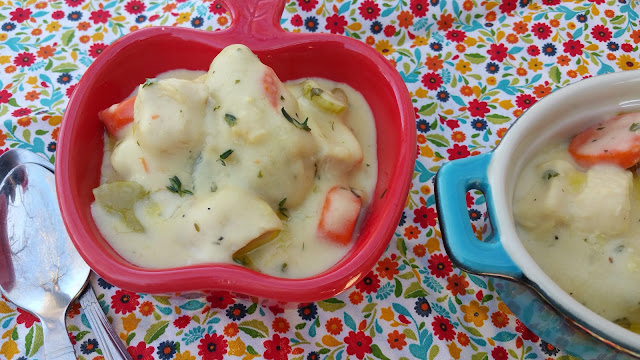 Posted by Denese Smith at 11:56 AM No comments: 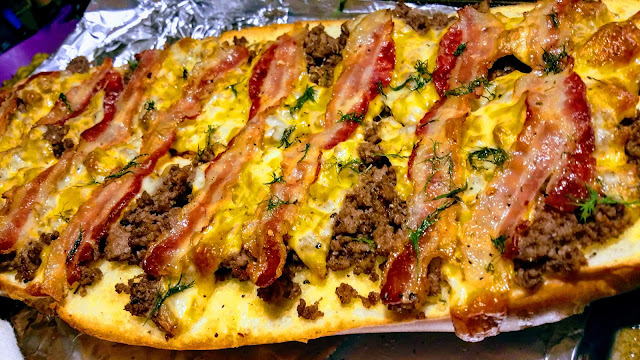 Give your everyday garlic bread loaf a kick in the pants and have the hungry brood ready for seconds. This recipe came to me one day on the fly, tired and weary from the day's schedule, but needing to get something on the plate.  I originally planned on doing a pasta bake, my go to, especially for Monday nights, to serve with the bread, but inspiration hit and I just put the cooked pasta in the fridge and swapped out the cheeses for an incredible meal to be served with a green salad or corn with minimal cleanup!
I love  a good burger and this recipe hits all those notes and even mimics some good 'ole pickles, by sprinkling with some fresh dill!

Place loaf in a cold oven and heat to 375*F.
By the time the oven has reached the desired temperature, it's time to remove from oven and begin assembling the deliciousness.
Start with ground beef topping.  I simply layer the toppings evenly across the warmed garlic bread with the torn dill across the top.  Of course, if you are not partial to pickles, you may want to omit it.   A nice fresh herb should be used in place though, for added freshness and brightness.
Place in  oven and finish baking until golden and melty.
Slice across the loaves to serve!
For a little variety you can add or subtract the proteins/veggies like sausage and peppers,mushroms and carmelized onions, lamb and mint, etc... Have fun with it!

Posted by Denese Smith at 6:34 PM No comments: 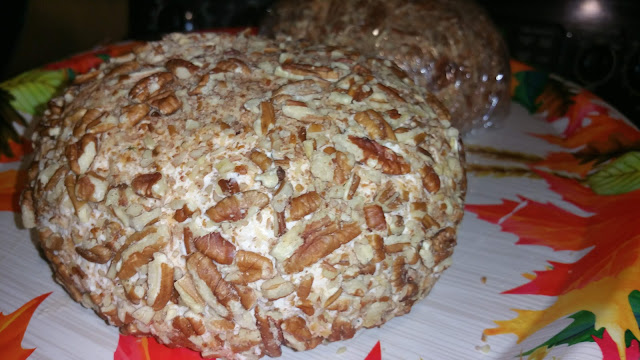 Until a recent request from my brother in law, I hadn't made a cheese ball since that time, way back when, and by that I mean high school, maybe college.  I had forgotten how delicious an orb of various cheeses, tangy, nutty, creamy and rich, sharp and mild, crumbled and spreadable could be.  I am glad I still have it in me and jumped to the call of presenting well.
The cheeses I chose for this decadent and toasty 'smear campaign' had to hit all the right notes.  It had to have body and melding flavors, some soft, some pungent, some distinct, some mild and just going with flow.  With that in mind I chose Sharp and Mild Cheddar, Vermont White Cheddar, Blue, Havarti and of course cream cheese as the base.  I also included some drained and pressed out pineapple to add contrast and texture, along with a very subtle and welcome sweetness.
This recipe made for two very good sized cheese balls,  about 3 lbs. each, perfect for the upcoming occasions of Turkey Day and when Ole Saint Nick comes to town.  Heck, it's great just to have to snack on at home and when "Netflix and Chilling" or checking out the new Disney Subscription.
You may also divide the cheese mixture into 2 to 4 smaller balls and roll in different coatings like buttery crackers, fresh chopped herbs or a different type of nut, even dried fruits or shredded cheese!  The flavor course will be much better when you allow the flavors to marry, while chilling in the fridge!  Don't forget about the upcoming St. Patricks Day, Socials, Potlucks,  Spring Break, Easter, Mother's Day, Father's Day...there's always a reason and season for 'cheesin!

Directions:
Bring the cream cheeses up to room temperature.
Combine all ingredients except the pineapple, Cheddar cheeses, blue cheese and pecans (or whatever coating you choose) nuts or herbs in a large bowl or in your stand mixer, which makes it hella easier to blend.
After the bulk of the ingredients have blended until smooth, add the Cheddar cheeses, pineapple and blue cheese crumbles, blending until just combined and distributed throughout. Turn off mixer.
Toast the Pecans in a dry hot pan, tossing frequently as not to burn or scorch, until fragrant, about 5 minutes.
Set aside to cool and crush unevenly with rolling pin or something solid.
Place crushed nuts into shallow vessel with lots of room to shake around.
Pour cheese out onto spacious surface and divide into 2 piles, on separate sheets of plastic wrap.
Shape the cheese into ball using the wrap as the barrier for your hands, then one at a time, turn out into crushed nuts and coat as desired.
Remove and place onto a clean piece of plastic wrap, gathering up by sides and twist to form a ball shape so it can set.
Place on plate or flat pan, twisted side down.
Repeat with second pile of cheese mixture.
Refrigerate for several hours, allowing the flavors to marry for maximum deliciousness.
Allow to stand at room temperature for 15 minutes or more before serving.
Serve with crackers, veggies, fruit, toast points as desired.
For a fantastic twist on a favorite, melt slices of cheeseball onto nachos or a hot juicy burger for a flavor  and tastebud explosion!
Serves plenty with leftovers, maybe. ;)

Posted by Denese Smith at 4:30 PM No comments: