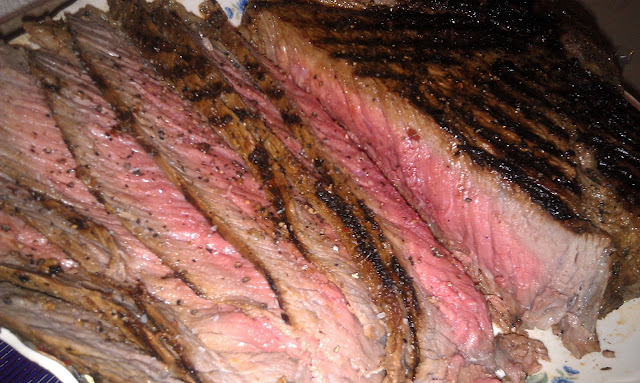 Flank Steak or London Broil is a popular and if prepared correctly, amazing main course, for even  the most special occasions.  Butchers in America  may also label Top Round/Roast as London Broil.  The name itself does not refer to the cut of meat, rather the style of preparation and the method of cooking.  Actually, the name is a misnomer, people in the city of London, England needless to say, are not familiar with such a dish.  Traditionally, this cut is marinated and cooked close to the heat source, about 3 inches and turned often to prevent burning. This is a cut to be prepared either using very little or an extensive amount of cooking time.   The meat is then cut across the grain on a 'horizontal diagonal' in thin slices to promote edibility. Failure to do so will result in a very tough and fibrous slab of virtual fodder, suitable only for cubing and tossing to the wild.
Recipe:
1 London Broil, about 3 1/2 lbs.{varies by size}
1/4 cup Sherry
1/4 cup worcestershire
1 tbsp. brown sugar
2 cloves garlic, pressed or finely minced
1 tsp. onion powder
1 tsp. sambal oelek
olive oil for drizzling
SPST

Rinse and pat meat dry and place in large resealable bag and drizzle with olive oil.  Combine ingredients in small bowl and add to bag.  Massage the marinade into the meat for a couple of minutes, then press out excess air and seal.  Marinate 8 to 24 hours.
When ready, discard marinade and pat meat dry.  SPST.  Broil or grill over high heat, turning often until desired doneness, about 8 minutes per side (varies by size) for medium rare, or 145 degrees.  Tent with foil .  Allow broil to rest for about 5 minutes before slicing for juices to re-absorb and temperature to reach 150 degrees.