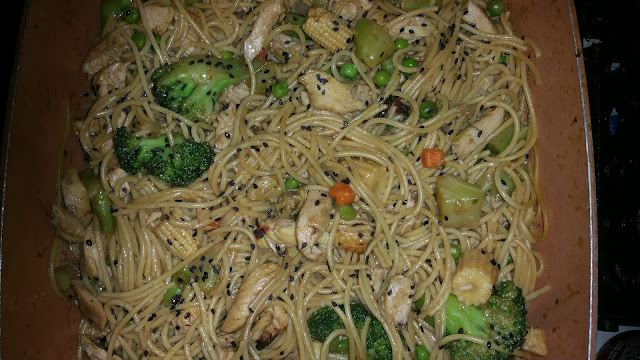 Feeling like takeout, but want to stay at home and save some money? This recipe is easy to execute and full of bold and delicious flavors from the Orient. These ingredients are probably in your pantry and freezer already. The Lo Mein in this recipe is actually spaghetti, left over from a spaghetti dinner I made on a Friday night, two weeks ago.  The uncooked spaghetti was in a large sealed zip bag, but I wanted to go ahead and rotate my pasta stock, so I built a dish around it. Buying the 2 lb. package really saves!
Some thawed chicken breast, frozen broccoli, peas and carrot blend, and some baby corn come together and BOOM! you've got a delicious one dish meal with all the right moves!
The black sesame seeds are an added plus, but not necessary, the plain will do just fine.  I used some liquid aminos in this recipe to supplement some of the soy sauce and shave the sodium, just a bit.  I don't worry too much about it in this dish, because the amounts are spread across at least 10 servings.
Some water chestnuts are a  great inexpensive way to add mega crunch and texture, just a thought!
Recipe:
1 1/2 lb. boneless chicken breasts, cut into strips, then cut into 1 inch, bite sized pieces
1 lb. spaghetti noodles, cooked according to instructions, in salted water, just short of al dente, about 7 minutes.
1 lb. frozen broccoli, thawed
1 c. frozen peas and carrots, frozen
1/2 can baby corn, drained and cut into bite sized pieces
1/4 c. reduced sodium soy, plus 3/4 c. water or stock to make 1 cup.
1/3 c. liquid aminos
1/4. c. pure cane sugar
3-5 cloves garlic, pressed or finely minced
1 to 2 tsp. Sriracha or to taste
2 tbs. cornstarch, plus 2 tbsp. water to make a slurry
1 tsp. black sesame seeds
1/2 tsp. ground ginger
SPST
Olive oil for drizzling
Sesame Oil for garnish, optional
Instructions:
In a medium hot skillet drizzled with olive oil, brown chicken in batches.
SPST. (Salt and Pepper to Suit Taste)
While pasta cooks, add the thawed broccoli. After 7 minutes, drain and shock in cold water.
Add pasta and broccoli back to spaghetti pot and drizzle with scant amount of sesame oil and keep warm on the lowest setting.
Meanwhile, in a medium bowl, combine soy, water, aminos, sugar, ginger, garlic, Sriracha and corn starch, set aside.
After the chicken is all browned, add back to skillet , add sauce ingredients from bowl and bring up to a boil
to thicken, then turn off heat.
Add peas and carrots and baby corn, stir.
Pour chicken mixture over pasta and broccoli.
Over medium low heat, fold until evenly coated and veggies/colors are distributed as evenly as possible.
Check seasonings and adjust as desired.
Sprinkle with sesame seeds and drizzle lightly with sesame oil.
Sliced Green onion will make an excellent garnish also.
Posted by Denese Smith at 4:47 PM No comments: 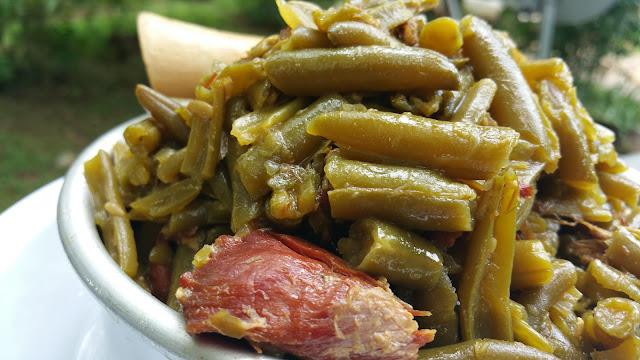 If you happen to have a ham bone around, from 'Virginia Prosciutto', in all its salted and cured glory would be great, now is a great time for this delicious and flavor rich dish that is these green beans.  Most of us have a sure bet menu items that our families' gravitate towards, travel well and get rave reviews, even from people we may not normally share the table with regularly.  I've been making this version of green beans for years, especially for the special dinners, birthdays and holidays.
If pork is not really your thing, no worries, smoked turkey wings, legs and necks, make delicious music with the greens too!
Old fashioned green beans aren't just dumped from the can and heated. Freshly snapped from the garden during this time of year is optimal, work with what you have access to. Soul Food style greens and beans should be simmered for additional time, up to 2 hours, sometimes more, infusing the vegetable with depth and charm, fulfilling and full of love and effort.  You can taste the history in each bite.
A few aromatics are all you need and a little more time, your tasters won't soon forget it.  I am a fan of a quick steam or saute of a garden fresh green bean, simple and drizzled with a little olive oil or sprinkled with some almond slivers .  As popular as green bean casserole is, I've never really fallen into that matrix, the cream of mushroom in the can, saving families since the thirties, when it was created and marketed for making affordable dinners and gussying up a plain meal in minutes, a godsend for the Depression Era.
This dish is as easy as pie, needing only the time to simmer for a couple of hours and reduce the liquids.  The pieces of ham are just a little added bonus!
Recipe:
1 gallon green beans, from the can, drained and rinsed
1 ham 🦴 or portion
2 medium onions, quartered
4 cloves 🧄, peeled and smashed
1 small pinch, red 🌶️ flakes
🐔 or 🥒 Stock or water, enough to cover green beans in large, heavy bottomed pot
🫒 oil
SPST (Salt and Pepper to Suit Taste)
Start by sauteing onion and garlic over medium high heat, in a large vessel, with a heavy drizzle of Olive oil.
Once onion is aromatic and showing signs of caramelization, add remaining ingredients and bring up to a boil.
Once mixture starts to boil, reduce to medium and let simmer for about 45 minutes, stirring occasionally.
After above time, reduce again to medium low and continue to simmer until liquid is reduced and beans are tender and flavorful.
Taste as you go, check the seasoning of the green beans until the desired intensity is reached.
Whenever that time comes, turn to low.
This recipe makes a large quantity. For smaller families or dishes, simply halve the recipe.
You can freeze the extras, for slow cooked veggie goodness in a flash later!
Posted by Denese Smith at 8:41 PM No comments: 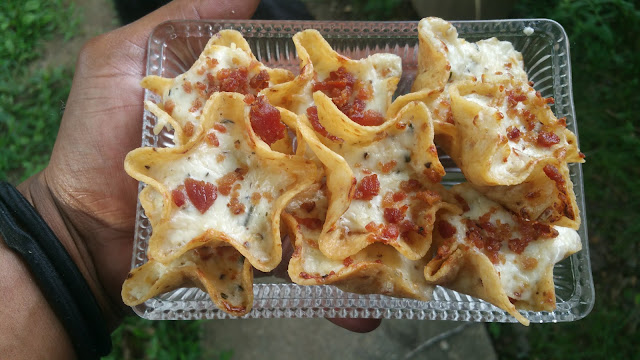 This appetizer happened sooo fast and was received so well, I had to share with my fellow Culinarians.  I had to stop in by Kroger, which is usually a once monthly deal, when I pick up my scripts and saw some sweet deals going on, my wallet approved of.  There was a gourmet dip in the deli section, reduced and reasonable, so I grabbed it up, taking advantage of something that would normally be out of my budget's comfort zone, saving me several dollars, that I would gladly keep for other essentials.

I was initially envisioning this gourmet dip, smothering a baked potato, turning a side dish into a main course with a few sauteed mushrooms or garlic shrimp and leafy green salad by its side.  As I made my way through the store, picking up some healthful steps with my Samsung Health app that's installed on my phone, I saw the tortilla cups.  These two items were not meant to converge, until I was back at home and having a few of the cups with a Spinach dip another family member picked up on the same visit.  I have a Ninja Foodi and it helps facilitate many of the spur of the moment ideas that may need my immediate attention, before I either forget, or fail to write down.  Luckily, this recipe became only a matter of putting 3 things I enjoy together and adding some heat.  I filled the cups with the Parmesan forward dip and sprinkled in a few real bacon pieces from the package, usually adorning a salad.  I placed my Foodi on the broil setting and in a matter of  minutes, there was this piping hot, cheesy, melty, crunchy and smoky 2 -3 bite snack, full of flavor and good enough to share with others.  The family loved it and looked forward to the next time they would be making an appearance.  That was good enough for me.  We don't normally agree on everything, at least not all the time, but this time, everything fell into place, like Plinkos on a game of The Price is Right, gotta love it when that happens!

Place in Ninja Foodi or under a broiler.

Broil until bubbly and melty.

Makes as many as you don't feel guilty eating.

P.s. The shadow you see directly behind the plate is actually one of our dogs, Grizzley, he wanted in on the action! I was out by my herb garden, trying to catch some good natural lighting and he was curious about what smelled so darn good and if there was enough for him!

Posted by Denese Smith at 12:13 AM No comments: 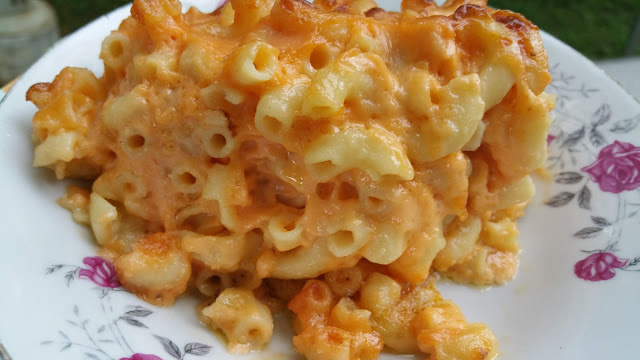 Mac and Cheese is an integral part of kitchens, families and meals all over the country.  In many ways, it's hard to go wrong, especially if you're privy to the box variety, which is still possibly the #1 best seller among convenience foods.  Today's recipe is not one in the same.  I used two recipes I created and rolled them into one to create this ooey gooey and inviting version of America's Favorite and a Southern American staple, Smoky Baked Pimento Cheese Macaroni and Cheese.  I came up with this Sunday, after considering the union many times over.  I was actually due to make a batch of my Smoked Pimento Cheese for the family and for my younger brother to try, he is in from New York for a visit.  Sunday dinner was upon me, so I also needed to get a menu going to complement some fried chicken and my Southern Style Green Beans, so Mac and Cheese would round out the roster.
Our family is fond of Nascar and we like to listen to the races and maybe place a few little friendly wagers to make it all interesting.  I've picked Ty Reddick as the up and comer to set these other drivers on their ears, forcing veterans like Denny Hamlin, "The Closer "Kevin Harvick, Martin Truex jr. and Keselowski to show and prove on the track more and more each week!  Reddick is on his way to great things I think, shoutout to him and his team.  Oh yeah, mac and cheese, this will surely be a food fan favorite, especially if you are a lover of the two dishes separately.  Prep is a cinch and the payout is a victory burnout.  It will leave the baking dish as fast as a Nascar race to the checkered flag!  Culinarians, start your engines or should I say ovens...
RECIPE:
1 lb. cooked macaroni, cooked in salted water for 8 minutes, then shocked in cold water, drained and tossed with a little olive oil.
1 12 oz. can evaporated 🥛
1 8 oz.  pkg. EACH regular cream cheese and Neufchatel (lower fat cream cheese)
1 8 oz. pkg. three cheese blend, 🧀
1 8 oz pkg. sharp 🧀, shredded
6 oz. EXTRA Sharp 🧀, shredded
4 tbs. 🧈, unsalted
1/2 c. mayonnaise, optional but optimal
2 tbsp. diced pimento, drained and pressed free of excess moisture
2  tsp. liquid smoke, hickory
1 tsp. 🧅 powder
1/4 tsp. 🧄 powder
1/2 tsp. celery seed powder
1/2 tsp. Jalapeno powder, optional
SPST (Salt and Pepper to Suit Taste)
🫒 oil for drizzling
Directions:
Bring all cheeses and butter to room temperature before beginning.
Preheat oven to 375*F.
In a large bowl, mix all ingredients starting from the cheeses down.
Fold in macaroni in two to three batches, blend well.
Spread in a large baking dish, sprayed with nonstick spray, butter or drizzled with olive oil.
Cover tightly with foil and bake until for about 35 minutes, until heated through and the top has set.
Remove foil and bake for an additional 10 minutes or until desired caramelization is reached.
Let stand for several minutes before serving.
Makes enough for a Sunday dinner with Monday covered!
*You may use substitutions wherever you see fit.  This is including, but not limited to lower fat mayonnaise, reduced fat cheeses and fat free evaporated milk. 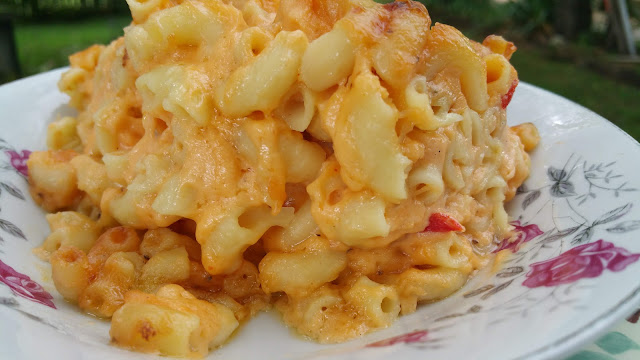 Posted by Denese Smith at 8:24 PM No comments: 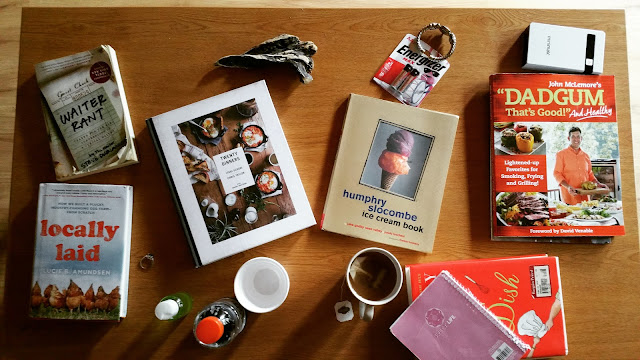