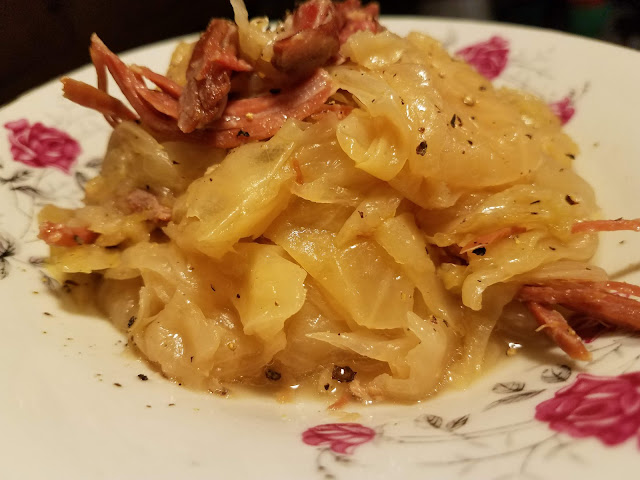 This is a Southern American dish inspired by my mom's love of cabbage.  Next to sweet potatoes and Creamy Potato Soup, this is a favorite.  Pork does not have to be used in this recipe. It does however, have roots in the original preparation of fried and braised cabbages, either from Old World Ireland or dishes in the  Americas.
I am a fan of using other smoked goodies like turkey necks, legs and wings.
After the cooking process, the skin may be removed and the meat shredded and tossed with finished product for a one bowl/dish meal, hearty and full of history, delicious to the body and soothing for the soul.
Cabbage was recorded in literary memoirs as early as the late 1400's, but shows roots in or around 1150 in Germany.  During earlier centuries, cabbage was referred to as "Coleworts"  It came in with the settlers to Jamestown and has been a considerable part of sustenance from day one. The cultivating properties and abundance served as food for humans as well as animals.
Recipe:
1 head of cabbage, rough chopped into chunks, large outer leaves removed, about 3lbs.
2 medium onions, quartered
2 cloves garlic, smashed
1 portion country ham, about 2oz. cooked
ham bone, optional
chicken/veggie stock or water
Olive oil
SPST (Salt and Pepper to Suit Taste)
Over medium high heat in a large heavy bottomed vessel, drizzle in some olive oil and add onions and country ham portion and bone.
Cook until fragrant and caramelization is evident, about 4 minutes and add cabbage.
SPST.
Saute for several minutes, then add chicken/veggie stock or water until cabbage is covered, add garlic here, then cover with lid.
Bring up to a boil, then reduce to medium heat.
Cook until cabbage is tender and liquid is reduced by more than half, about 45 minutes.
Check seasoning as it cooks and adjust accordingly.
Remove ham portion, shred, then re-add to cabbage.
Remove ham portion completely if desired.
Serves many.