Growing up in the south consists of certain culinary givens.  Homemade breads, potato salad, macaroni salad, chicken and dumplings, fried and baked chicken, country hams, to name a few.  Corn in any fashion is also a mainstay partly because of it's abundance and ability to take on so many forms.  Corn is prevalent in our culture and is one of the key reasons the early settlers didn't starve to death.  For that, we can thank the Native Americans, who introduced and taught our ancestors from Europe how to plant, grow and prepare corn in a myriad of ways to be consumed.  We can thank the Europeans for bringing us the milk, eggs, cream and leavening agents, which bring me to the recipe at hand. Corn pudding has always been a menu item in our family, especially around special meals and holiday times since I could remember.   For my family, corn pudding was an affordable dish that could be prepared and be considered a dessert item.  My mother would also prepare chocolate and vanilla rice puddings.  These items could be made with items on hand and still remain within the family's food budget, considering how many of us there were to feed. Corn pudding is prepared as a savory side in many regions including directly above, below and beside Virginia. Virginia is relatively where the "south" begins as compared to the upper states, but not so much that we have the same cultural foods fan fare!  Virginia has corn, peanuts and country ham as three  solid components and exports.  I like to call where we live "Middle Eastern Southern" because we share culinary interests and ingredients with both the north and south respectively.
My sister Gayle recalls when she was a young girl, sitting vigilantly at the table whilst mom made corn pudding and the aromas of vanilla, cinnamon and comforting oven heat permeated the air and filled her mind and soul with those pleasant, loving yet nostalgic smells.  I have long since taken over the reigns as the sister that prepares the recipes that mom used to cook for our family.  She trusts my recipes and judgement, and enjoys being able to just sit back and still have things in a manner that's consistent with the way she herself would have done them.  I really enjoy preparing this recipe and my nephews especially love my corn pudding and they're in their early to mid twenties, so it can definitely be considered a recipe of interest for the masses, young and old.
Ole' Fashioned Corn Pudding
6 c. whole kernel corn
4 c. creamed corn
1/4 c. flour
1/2 stick butter
1 can evaporated milk
1/2 c. granulated sugar
1/2 c. packed light brown sugar
2 eggs
2 tsp. pure vanilla extract
fresh nutmeg
SPST
olive oil for drizzling
Preheat oven to 375*F
Melt butter in medium saucepot over mediun high heat,  cook flour for about minute.  Remove from heat.
Add milk, sugar and creamed corn, place back over heat, and stir until thickened, about 3 minutes.
Remove from heat and add whole corn, vanilla, and freshly grated nutmeg, about 1 tsp.
Temper in eggs.  SPST
Place in suitable sized baking dish greased with drizzled olive oil.  Cover tightly with foil and bake until set, about 45 minutes.  Remove foil and continue to bake until slightly golden, about 15 minutes.  Let rest slightly before serving. 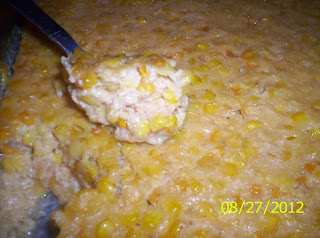 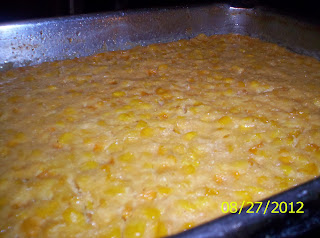