Yesterday was one of the days when we wish it were the next or day before, considering the weather, that was rainy and dreadful looking.  My children, Genesis and Bronwyn, my nephew Braelyn and my sister Hollie were tentatively scheduled for a trip to the "Pumpkin Patch", filled with corn mazes, farm animals like goats, pigs and geese, pumpkin hunts and tall structures built entirely of bales of hay, to climb, slide and ramble throughout!  Unfortunately, the weather had different plans, and the trip was postponed until the following Monday.  The children were devastated.  They had already placed their 'orders' for golden, delicious, pumpkin pies, made fresh from the take-home pumpkins picked fresh from the patch!  In a perfect world, Mommy could wave her magic wand and the hay would magically refurbish itself, the ominous clouds would bow their heads and gracefully bow out to expose the beautiful blue flecked Autumn sky, with the brilliant rays of a crisp day's Sun, shining and gingerly drying the chilly dew, that would make running a hazard and a hindrance to scavenging for the mini gourds scattered about the immense hunting field.  The call for the postponement came shortly after the children reached the school, around 8 am, and with a shrug of dismay, I threw the careful packed spoils of Sliced deli turkey, ham, bologna with American cheese on Bollio rolls, Fruitables, and Doritos into the freezer for the "to be continued" picnic on the farm with the gang! I then had a a notion for comforting foods, aromatics, fragrances of grandeur, to warm  and necessitate this Day of Gray, we desperately needed the rain anyway.  I had picked up some fresh turkey wings from the market, and considering the forcast, they made the perfect fit for something to cook slowly, with low maintenance, and maximum flavor rewards.  Turkey should not be shunned or denied until Turkey Day, as it provides and evokes warm and fuzzy thoughts, as with holidays and not to mention a healthy dose of trytophan for a lulling rainy day nap, if the opportunity arises!  Wings contain a sizable amount of fat as compared to breast meat, but this can be skimmed during the braising process, and after cooking, the skin may be easily removed as not to pose a threat to the nutritional aspect of the meal as a whole.  These wings are braised  in a vegetable stock, a Mirepoix, fresh garlic and a soft chicken bouillon cube for depth to it's flavor profile.  They are braised for several hours, and finished in the oven if desired.  These wings are served best just before falling off the bone, and the moisture levels will remain, as with rich flavor.  I paired these wings with Farfalle or bow tie pasta, cooked in the reduced juices of the wings and tossed with green peas for a wonderful color implement, and filling bluster!  The sun had returned by the time dinner came around, but thankfully, these recipes provided the rays of aromatic, and rainy day comforting bliss during it's down time! 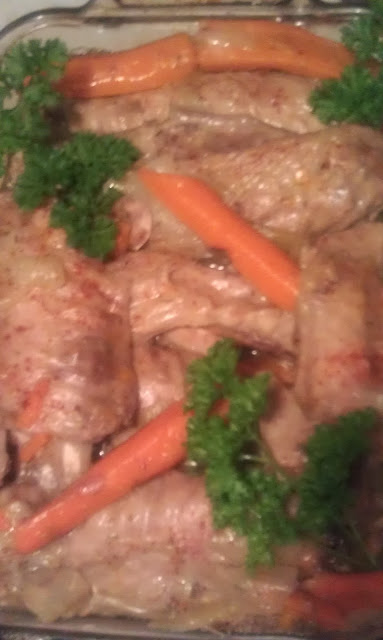 Recipe:
4 lbs. Turkey wings with tips if available
2 large carrots, sliced lengthwise, then halved
2 large stalks celery, cut into thirds
1 large onion, cut into eighths
3 cloves garlic, pressed or finely minced
2 soft chicken bouillon, cubes
water
olive oil for drizzling
SPST
For Pasta:
2 tbsp. corn starch, mixed with a little water
1 lb. bow tie pasta
3/4 c. green peas
additional water if needed
In a large heavy bottomed or dutch oven over medium heat, place veggies, drizzled with olive oil and cook until aromatic, about 3 minutes.  Add bouillon.  Cook additional minute and add washed wings to vessel.  Fill until wings are just covered with water and cover, bringing up to a boil, over medium high heat.  Reduce back to medium and cook wings in a rolling simmer for several hours or until tender, but not falling off bone and cooking liquid is reduced to about 1/3.*
Begin to skim fat as the wings cook, and discard.

Once the wings are tender, place in baking vessel,  Spoon some of cooking liquid over each wing arranged in dish, about 1 cup total.  Remove carrots and arrange alongside wings. Cover tightly with foil and bake in oven at 350* for an additional 45 minutes to 1 hour.
Add enough water to liquid reduction to make about 6 cups.  Remove from heat and whisk in cornstarch.  Bring up to a boil until thickened.  Add pasta.  Cook over medium heat until pasta is al dente.  Stir in peas. Turn off heat. Cover with tight lid and let pasta to absorb the juices.  SPST and drizzle with olive oil if desired.
Serves 6 to 8.
*Note:  I like the rustic note the simmered veggie bits add to the pasta, but feel free to strain them off for a more refined sauce! 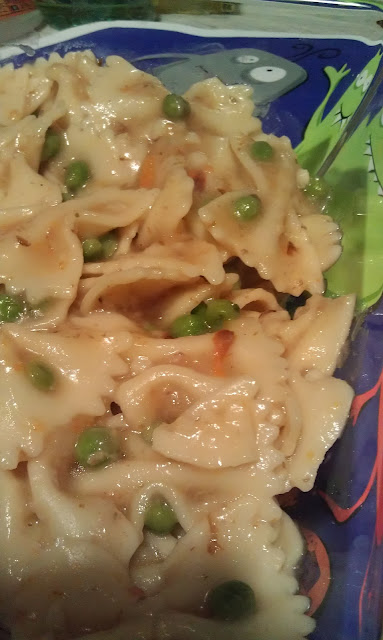