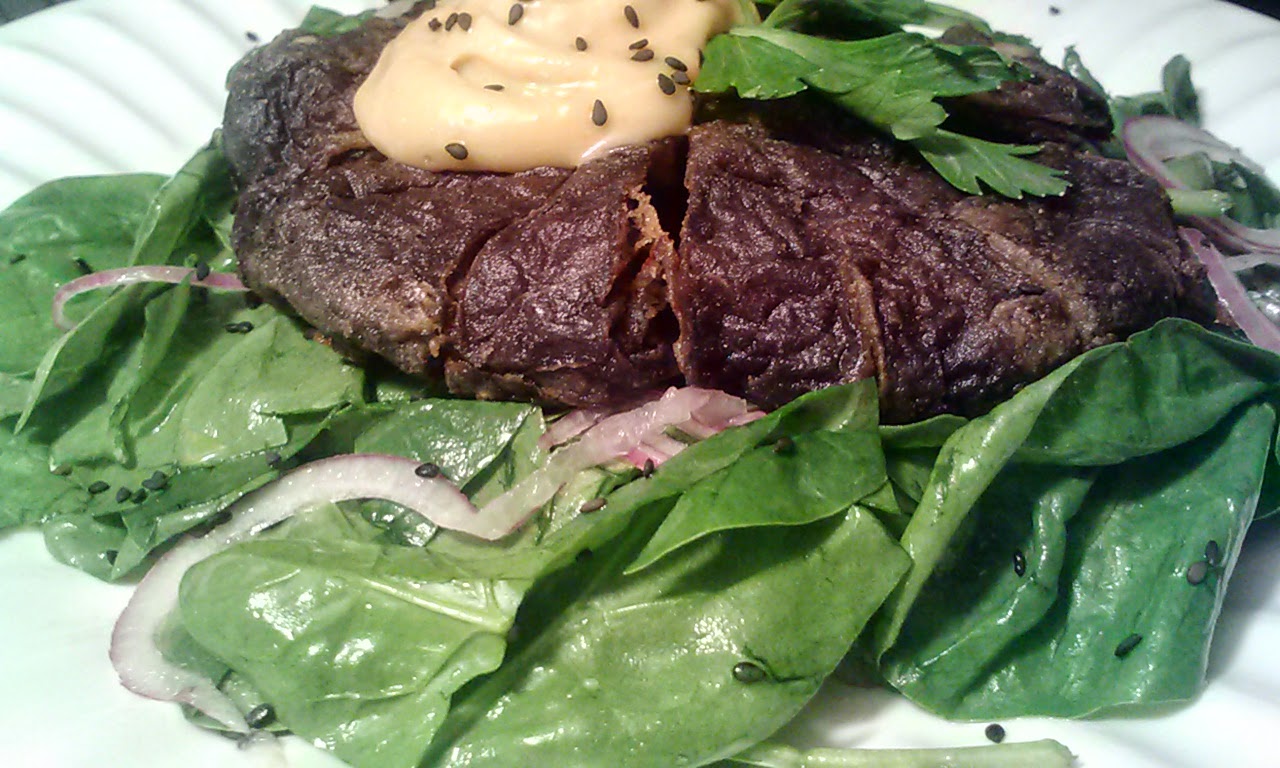 An inexpensive vegetarian take on a Southern American classic, this recipe is easy on the digestive system and teeming with Vitamins E, D ,K, protein and fiber. Indulgent in a way, but not too imposing on the waistline, especially for an occasional splurge.  I originally planned to fashion the portobello as an appetizer dish, thinking the breaded fungus would fan out like a flower blossom when fried, to be torn off in strips and dipped in the delicious Red Miso Mayonnaise.  Alas,  my theory went awry to a degree, and when life serves you lemons, Make Lemonade!
The portobello was still as tasty as ever, but not presenting itself in an appetizer form I would accept, so I took it to the entree arena and with a few other wonderful and flavorful ingredients, felt accomplished enough to share!  My sisters Cherie, Hollie, and Gayle really enjoyed this recipe as did I.  My mom may have, but she abhors mushrooms, so she refused to try it,  especially since she could actually see the portobello in plain sight! My mom is funny like that.   No worries though, because she is my most discerning critic, whose feedback on the many dishes she does taste and enjoys, is tantamount to that of a world class chef, and I, her loyal and grateful minion.!
Recipe:
2 Portobellos, about 8 oz.
seasoned flour
4 c. fresh tender spinach
1/4 c. thinly sliced red onion
1 tbsp. regular or lite mayonnaise
1 tsp. Red Miso
1 tbsp. seasoned rice vinegar
1/2 tbsp. olive oil
SPST
vegetable oil for frying
Black sesame seeds for garnish
Heat oil to 350*F
Make slits around circumference of portobellos and dredge in flour.
Deep fry for several minutes until portobellos float and are deeply browned, drain well on paper towels.
Meanwhile, mix mayo and miso together in a small bowl and set aside.
Toss spinach with rice vinegar and olive oil, SPST.
Divide among two plates.
Top with portobellos and divide the mayo between the two.
Garnish with black sesame seeds and serve immediately.
Serves 2.