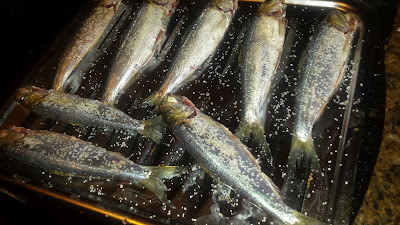 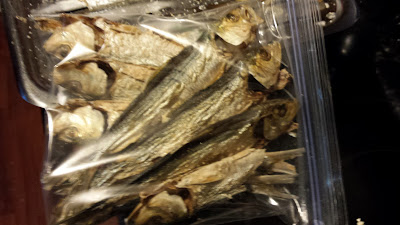 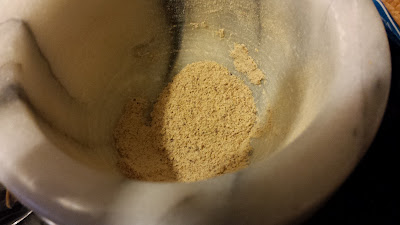 Last summer, I could proudly say that I had consumed more fish during those several months, than I had for the whole year; perhaps as much as two.  I have a family of  recreational fishermen, including a brother in law, whose proclamation is that of an  "Angler".  He is quite efficient I might add, an avid hunter as well, who affords me the wonderful wild game by seasons from squirrels to wild turkeys to venison, plus volumes of striped bass and catfish with heads the size of small children, yeah he's good.
Another brother in law favors striped bass, wall eyed bass and perch.  On any given day off during the summer, he would set out mid morning or evening to bring  back the catch of the day.
During last summer, my sister Gayle and I would clean anywhere from 25 to 50 fish collectively, maybe two or three times throughout the weekend; scaling, butterflying and soaking, frying some fresh and bagging and freezing piles for later.
I like to consider days like that live labs of sorts, helping me hone my skills and efficiency, making me a stronger chef .
I try my hand at fishing, licensed and all , but I haven't reeled any in yet!  I even accompanied the guys on some of the bait runs. We meet up with another avid fisherman, usually late night or early morning because of how the dams and bait run, who travels extensively for the ritual of catching the infamous 'shiner' or"'LY's" which are a small and plentiful bait fish, found also in schools and near rocks at the dams and lakes.  Larger fish called shad are also a part of the haul, but aren't as sought after as the smaller previously mentioned bait, but finds itself in the throw nets.
When meeting with the bait-man, he pulls out a large cooler.  Upon opening the lid, he reveals hundreds of these small and fresh beauties, glistening with ice, lustrous, all their tiny eyes are clear and they smell fresh, not fishy!
I was stoked and reminded of the photos of fishermen from other countries and their baskets or small boats of fresh fish, on their way to market, home or both.  I was reminded of the sardine and other fishes feasted upon regularly in Italy and the Mediterranean, or packed in salt and dried along the African Coasts.  I wanted to see if they were as palatable as the similar ones I'd seen.  I wanted to see why we weren't eating those too!  The fishermen chuckled when I said, I want some to take back home to the lab,  that being my kitchen. I was inspired instantly and set to work.
The above photos illustrate what I did with the larger shad, about 4 or 5 inches long.
Recipe:
I scaled and gutted them all, rinsed and sprinkled them with kosher salt.
I placed them in a 200 degree convection oven for around 6 hours, until they were completely dry.
I let the fish cool out in the open for about 1 hour.
I then broke the fish up into manageable pieces and used my mortar and pestle to turn the whole fish into a powder.
I mixed the powder with a mug of hot water and drank it.  I also added it to my Ramen bowls.
I finally had a lasting fish stock on hand, and it's shelf life was extended considerably! I keep the fish whole in a zip lock type bag, and pulverize when I need them.  I dried these fish last summer and they are still wonderfully intact and I get to drink  a whole fish anytime and reap the benefits of the whole thing, wasting none and loving the copious amounts of goodness it is for my mind, body and soul.  Oh, the fishermen were amazed at what I came up with, they added some credits to my resourcefulness, and were reminded of yet another reason I was good to have around!