Oregon Berry, Right in your Own Backyard: Berry Useful 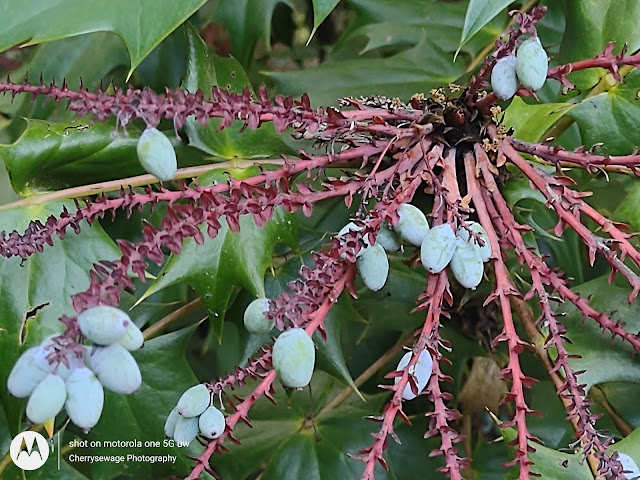 I did some research on some of the plants and bushes around our property out of curiosity and also for awareness of surrounding and indigenous plants.  This particular bush caught my attention for several reasons.

I have identified a Mahonia aquifolium (Holly Leaved Barberry), aka Oregon Grape shrub in the yard, prized by the Natives for hundreds of years for its Medicinal properties.

Pacific Northwestern Natives used the roots of the Berberis Mahonia for treatment of various ailments including but not limited to hemorrhages, tuberculosis, stomach issues and arthritis! It's quite a wonder to realize something so versatile and useful can literally be found right outside your door.

Its been a 'decorative bush' bordering the sidewalk for decades it seems.   When my sister called it a Holly Bush, I needed to educate myself on the subject, to support my opinion that it was NOT a Holly. Before reading into it, the best I had was the fact that the berries were not red, nor would they turn red at any point, but I did agree that the leaves were like that of  a Holly. She has the same name only spelled differently, so I really needed to have my facts straight, because all this time, she thought she and the shrub were one in the same. 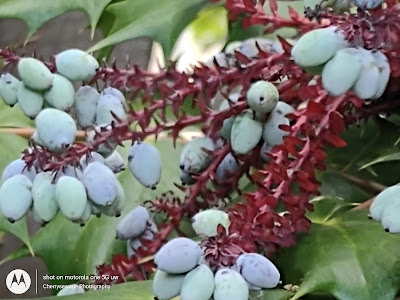 When I was satisfied with my identification steps, I tried one of those berries and even got her to try one.  It wasn't as bad as I'd read, though we both had to visit the bathroom very shortly after consumption.  Otherwise, all went well.  The gastro episode falls in line with its properties, as far as being a detox and a bevy of other attributes.  I plan to harvest some of the bark and also make a tincture! The birds have had a splendid time, so the pickings for the berries are slim.  I'm glad I am now equipped with more knowledge for the next time around. 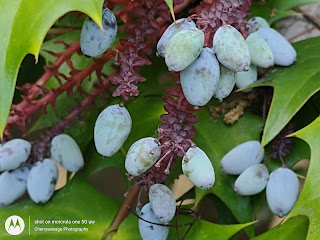 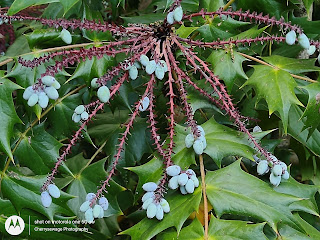 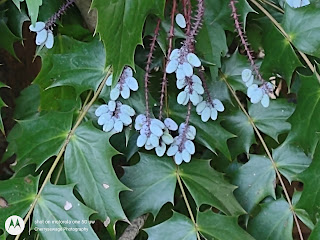 One of the most striking properties involves the color of the interior wood of the branches. It is a brilliant yellow color.