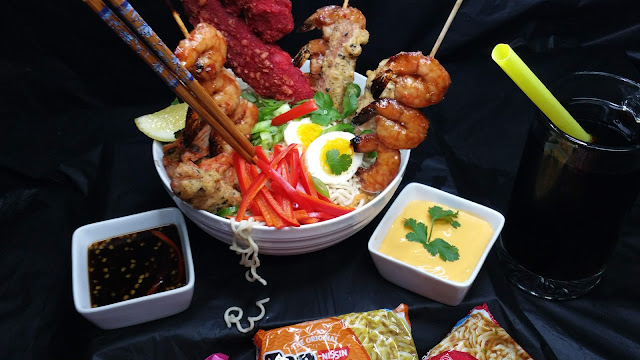 This post is simply dedicated to the one that got away.  Featured is a photo of my rendition of How I do
Ramen, a contest sponsored by Nissin, which was founded by a Japanese fellow by the name of Momofuku Ando, in 1958, who invented chicken Ramen.  He later went on to create "The original Top Ramen in 1970 for the United States. For  the 50th anniversary, Nissin launched a contest seeking a person to fill the newly created position as the "Chief Noodle Officer", by submitting a photo of 'how you Ramen', recipe and short paragraph on why you would be the one for the job.  The winner was to receive 50 years worth of Ramen, $10,000, and exclusive rights to different aspects of the Noodling process with Top Ramen for a full year, pretty cool right?! But yeah, the concept I came up with is an homage to Korean origin Mukbang, which started gaining popularity around 10 years ago, and has since become a phenomenon that has swept world for obvious and some not so obvious reasons.  I was also amidst another chef's challenge at the time, which I go into in previous articles, so I was pouring most of my time and energy into that project. I really enjoyed the Spiceology challenge and know my creations will go towards a good cause, that makes me smile.  The noodle bowl for the aforementioned contest was a fun one too.
The bowl consists of three types of Ramen flavors, chicken, shrimp and beef.  The seasoning packets are combined to create the broth for the recipe.  I only added enough to be visible in the photo, maybe about 1/3 of yield.  I included some sweet and sour shrimp, simply marinated and broiled to perfection  and brushed with some Thai Chili sauce, after marinating in some rice vinegar, garlic, brown sugar and liquid aminos.  I also included some crispy, crunchy and appetizing Hot Cheetos Chicken, cutlets of sliced chicken breast, double breaded with an egg wash and deep fried to a heavenly crunch, with the chicken breast retaining its moisture within the Cheetos barrier.  I also have some Everything Bagel fried Spam.  I made a quick batter using buttermilk pancake mix and a tablespoon of Everything Bagel blend, rendering a nice and crunchy shell over the Spam, imparting much needed texture to a versatile and often loved or hated protein source, I for one, enjoy a piece of pan fried Spam every now and then, there is no shame here.  I also included an egg, steeped and slowly cooked in concentrated green tea and liquid smoke!  I sliced some sweet red peppers and added fresh cilantro and Serrano Chiles, plus some crunchy, pungent and tangy Kimchi, fresh lemons and sliced green onions, all adorning the top of this dish to feed several or one Mukbanger.  I made sure to add an umami rich dipping sauce full of Sambal Oelek, with a touch of brown sugar and reduced sodium soy and a splash of fish sauce, plus the ever popular Cheese Sauce for dipping and I guess helping food slide down your gullet, chewing optional.  Please chew your food lol.  I made sure to include a nice tall mug of dark soda, diet for,  me, which is usually always included, ice cold with a straw to top it all off and of course provide much needed service when applied.
Due to a technicality, my submission was not able to be accepted, I worked literally up to the minute to get it in on time, alas I digress.  I failed to email the tiny paragraph about why my photo and recipe would be the right  choice for representing the new CNO. And to think, I submitted the writing part the next morning on a whim, an added incentive, and just to be on the safe side.   Oh well, you win some, you lose some, but I feel like a winner, because I came up with a Fantastic presentation, concept and recipes.  This bowl is something serious, seriously good, my family and I shared this bowl after the photo shoot and all was well.  Next time, I'll make sure the fine fine print is taken care of, in the meantime, I hope this feature fills your head with creative energy and your bellies with delicious rewards.
Posted by Denese Smith at 3:53 AM