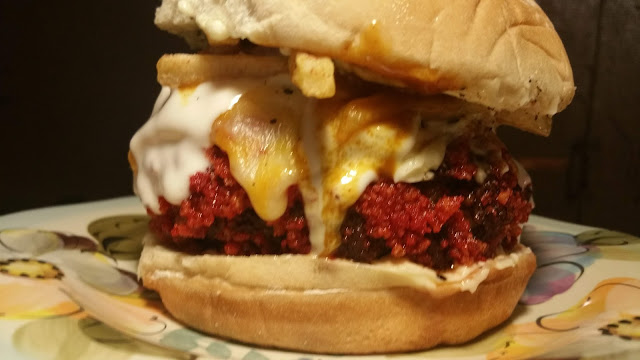 After much cajoling by the kiddoes, I decided to duplicate yet another food item from the Mukbang videos, the Hot Cheetos Burger.  This one, though seemingly rather easy from the video, gave way to a bit more of a challenge, as opposed to doing the chicken and even the pork cutlets, I didn't post those guys, but they were phenomenal.  In keeping with the burgers we saw on the video, they were easily 1/2 lb. each, way too much for my taste, for a single patty at least, though I do love a good double burger!  The size however, does lend to a protein with medium rare to medium outcome, of which I failed miserably and had to microwave my "Ginormagantuan" (borrowed from Stan Smith, American Dad) burger.  The microwave, though shunned by some, was a savior for this recipe, this time.

The burger demo calls for the par-cooked burger to be dipped in an egg wash, then doused liberally in the Hot Cheetos coating, then deep fried.  Due to the stupid crazy size of my burger, I was left with a burger, medium, with a raw center.  I used ground chuck mixed with super lean beef to achieve a more meaty and stable patty, I think I'll use the good old 75/25 blend, which is great for maintaining a super moist product, as long as you drain it properly, always pour off that extra animal fat, you don't need it, even if you add some olive oil back into the dish to retain moisture, it's still a 'better for you' fat, with no cholesterol.

Once I worked out the doneness kinks, the rest was smooth sailing.  For dramatic effect, I added Colby Jack Cheese, American cheese, which is just the right thing to do, some fries, WuJu Sauce and Blue Cheese, for a Hot Cheetos Loaded, Black and Blue Behemoth. For the record, WUJU is a beast!!  You will want it on everything!  The burger was rather tasty, but I will definitely make it with 2 patties instead of one next time and use corn starch before the first dip, to keep the red hot coating in place, its all about the crust.  The family received the burger well, and everyone was beyond stuffed.  They did however agree that the chicken and pork are more favorable candidates for our imminent next round of Hot Cheetos Mania coatings. 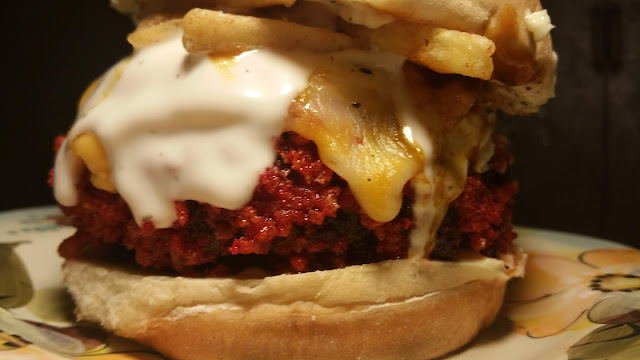 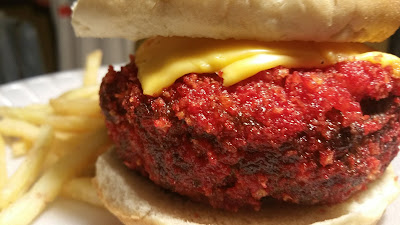