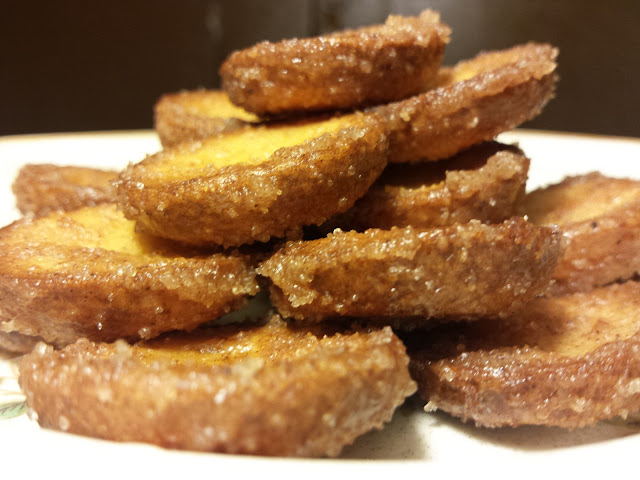 This recipe was initially a mishap while developing the Venison, Bacon and Black Bean Mini Chili Bowls.  I was toying around with the consistency of the Yorkshire Pudding bowls, and wanted to see if adding less batter to the mini muffin pan would allow it to rise less inhibited.  In fact, it did not, and the batter, which I reduced from about 2 tsp. to 1 tsp., rose just so and baked as a cookie would, not rising much at all.  Considering I needed a vessel to house the Venison mixture, these of course just couldn't accommodate, so I set them aside.
I didn't want them to go to waste, so I pondered how they could be refurbished or simply re- purposed.  Then it hit me, the ingredients were simple and essentially those included in a dessert or custard of sorts.  I then set out to give them more character and amp up the flavor profile.  I had to make a few minor adjustments to keep it in true cookie form, like omitting the onion powder and replacing it with vanilla extract, as it was initially intended for a savory recipe... I melted some butter and added a bit of cinnamon and sugar,stirring together until well incorporated. I then tossed the cooled cookies in the cinnamon sugar and gave them a taste.  I was impressed to say the least and these little guys actually received more attention than the original recipe!  They paired quite marvelously with my coffee and I'm sure the same is even more so with a spot of hot tea!!!  Quick and easy, sweet, salty and crunchy with amazing texture, these cookies turned our to be a delicious bite-sized treat!!!
Recipe:
1 c. AP flour
1 c. milk
2 large eggs
1/2 tsp. pure vanilla extract
1/4 tsp. Chinese Five Spice
Pinch of kosher salt
melted butter
Cinnamon Sugar
Preheat oven to 400 degrees.
Combine above down to the Five Spice and blend well.
Spoon about 1 tsp. into each mini muffin cup.
Bake until puffed, golden and crisp around edges, about 8 minutes.
Transfer from pan to cooling area and repeat until batter is used.
Once all cookies are done, melt butter in a large bowl and toss cookies in it.
Shake on some cinnamon sugar and toss again.  Add as much or as little as you wish depending on preference.
Makes about 4 dozen.