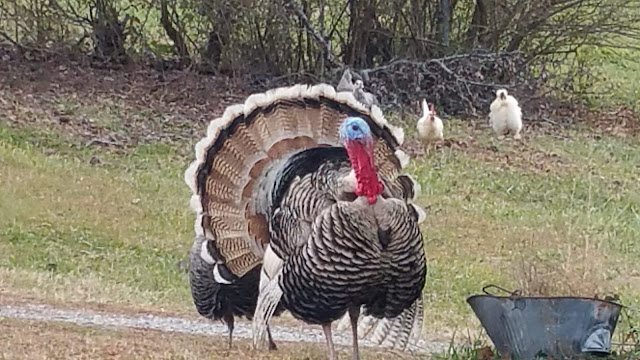 I was on my way to the Supermarket, as usual, and happened to ride by this guy, I believe he's someone's pet.  Upon the first ride by, I thought this gorgeous specimen was a part of a someone's lawn ornaments.  There were four other birds situated around in the area as well.  Two of the birds appeared to be female turkeys, along with one chicken and another bird that looked like he wearing pants, I know there is a scientific name for this chicken, but saying it's wearing pants makes me chuckle.  My passenger and cousin, Aaron, was able to take in all of the excitement, and I was just trying to catch up, and was willing to bet that they were so still originally, at quick glance mind you, they had to be fake.  I mean talk about a 'Mannequin' challenge, they were pros!
Mr. Turkey was quite a distance away from the main road, about 40 feet, but with his chest puffed up and his feathers in full fan, I could see him very well.  I had to get an even better view, as when I turned around to gander again, still not certain if he was real, he had returned to his normal and unimpressive state, blending in with the female turkeys sans the snood, wattle and caruncles, which was virtually invisible from our distance away.  The snood is the flap of skin that hangs from the top of its nose, a name also synonymous with a hairnet, one that acts as a harness for the hair.  The wattle is the red fleshy portion under the would be chin, like a leathery, red clutch.  I was a bit disheartened to see that even though I was able to confirm the fact that they were NOT lawn ornaments but living breathing birds, he had deflated and relaxed his feathers and it seemed as if the show was over.  I reluctantly pulled into the driveway of a person I did not know, to turn around yet again and head back on my intended travel plans, thinking I had missed my chance.
Just before I was going to give up, Mr. Turkey and his harem spotted us and they began to saunter over to the area we were in. He was strutting his stuff and posing for the ladies, proud and strong looking, confident.   It's almost like he didn't want us to miss out on his Awesomeness; the neck was very textured; small, medium and large sized nodule-like projections.  His neck was also long, blue and red, with the addition of his crimson colored baubles or caruncles.  His chest and body was distended, its plumage in all its regale, admirable. There were multiple layers of feathers, hues of brown, with black and white. They went from one dimensional to three dimensional in seconds!  His snood shook back and forth as he meandered closer and closer, until he was literally, blocking our path.  Then he stood there. This is the most up close and personal I had ever been with a live turkey, I even let up my window a bit, then more, then even more, in case some random acts of Fowl violence occurred. Perhaps because of the PTSD I have from chasing baby chicks as a girl, then feeling the wrath of the Mother Hen.   My Auntie Gloria warned repeatedly as I recall. Alas, what was a 5 year old to do, they were so damn fuzzy and cute, the chicks, not the attack, that was all claws in my braids, scalp and face, then black feathers and flapping wings...
Mr. Turkey stood and observed, not a hint of fear presented itself as he stared, as we stared, in awe of how brazen and magnificent this bird actually was.  Then he let out his "Gobble, Gobble Gobble Gobble Gobble" and we laughed, his greeting and closing remarks, duly noted.  Immediately following he trekked off to the side, allowing my vehicle to make its way back onto the main road.  The experience made our day, Mr. Turkey captured the next 15 minutes of our conversation, as I set off to my errands with Aaron.  We had been bewitched by its beauty, quite an unexpected surprise, a gift even.  I'm glad I could capture a few photos, because this was something you would probably have to see, to believe. Thanks Mr. Turkey, for giving me a fond memory, a story I plan to tell many many more times. I am thankful that he isn't food, but a pardoned pet it seems and he seems happy that his fate is not sealed, as far as I know.
Ever since then, when I'm on that particular road, I keep my eyes peeled for another sighting, trying to see what this guy and his crew are up to!
\