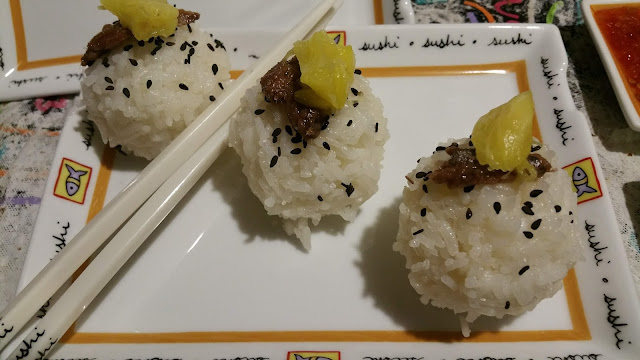 I made rice balls for the first time during these last several weeks, at the request of my youngest and Anime fanatic, Bronwyn and they are a real treat.  The best part about them is that they are virtually a blank canvas for any toppings you can dream up.  This particular version features two ingredients that I think work really well together as far as flavor contrast and balance goes.
Since this was a spur of the moment request, I didn't have any smoked salmon or crab to top these off or bury in its center, as the initial recipe suggested.  Bronwyn wanted them plain anyway, so no buried treasures of simmered ginger infused pork or spicy beef was anywhere in sight.  I topped my rice balls with delicate and umami forward portions of canned anchovy and complimented the saltiness with the sweetness of freshly cut pineapple pieces.  The black sesame seeds provided a nice nuttiness and  pop of color.
Sticky rice is a rather labor intensive dish, though it is not difficult.  The most important factor is rinsing the rice to remove the starch. It must be done so many, many times.  There is a particular variety of rice traditionally used for this by the Japanese called Sushi rice, also known as glutinous rice, which is sticky when cooked.  For this recipe, I chose to use Jasmine rice, though it is not as sticky when cooked as the suited rice.  It did however perform well.
For this recipe, I simply vigorously rinsed the rice several times and cooked according to the indications on the rice label, but I use 1 1/2 cups of water for every 2 cups of rice.   I then drizzled the rice with mirin mixed with seasoned rice vinegar, while in front of a fan, constantly tossing and turning the rice for even coating.  Afterwards, I took portions of the rice and attempted to shape them into the traditional triangles, but opted for the balls, because they were easier.  lol.
We used low sodium soy, smoked tamari and Thai Chili Sauce for dipping. 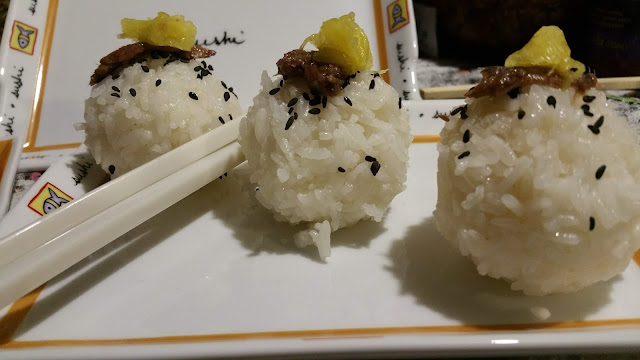